Morena Baccarin is a Brazilian American actress, still remembered fondly by the Browncoats (Firefly fans) as Inara Serra, although her work since as Adria on Stargate SG-1, and in V and Homeland had far longer runs. She is currently (2016) playing Dr. Leslie Thompkins on Gotham, and providing the voice of Gideon the futuristic computer on The Flash.

She is in a relationship with her Gotham co-star and The O.C. star Ben McKenzie and the two have a child together (born 2016). 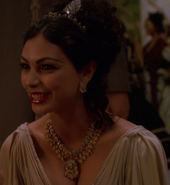 Add a photo to this gallery

Retrieved from "https://numb3rs.fandom.com/wiki/Morena_Baccarin?oldid=5948"
Community content is available under CC-BY-SA unless otherwise noted.